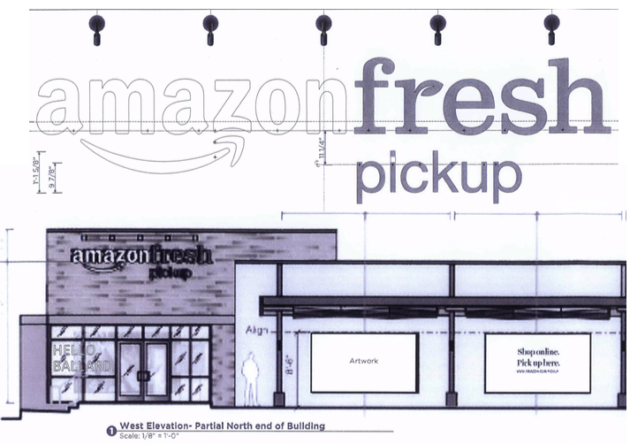 New permit documents reveal “AmazonFresh Pickup” as the planned concept for the next phase in the online giant’s physical retail initiatives, amid new clues that the first drive-up grocery locations could open in Seattle soon.

In addition, GeekWire this weekend glimpsed part of what will happen when customers arrive at the stores, as workers temporarily took the wraps off some of the signs located at each parking stall in one of the Seattle locations.

According to the permit filings, Amazon last week got the go-ahead from the city of Seattle to install signs reading “AmazonFresh Pickup” for stores in Seattle’s Ballard and SoDo neighborhoods. Windows at the entrance will be imprinted with greetings to each neighborhood, for example, “HELLO BALLARD,” and “HELLO, SODO.”

The filings show signs on the exterior walls with messages like “Shop online. Pick up here,” and “Relax while we load your groceries,” along the exterior.

The full length of the Ballard AmazonFresh Pickup store. (Image Via Seattle Department of Construction and Inspections. Click for larger image.)

In another hint that the stores are getting closer to opening, a film crew was working at the SoDo site Monday morning. They wouldn’t say what they were doing, but Amazon has in the past included promotional videos to introduce new concepts, such as the one released when the company announced the Amazon Go automated convenience store last year.

Permit records also point to what could be the web address for the online shopping portion of the experience: www.amazon.com/pickup. For now, the address redirects to a page that doesn’t load.

We’ve reached out to Amazon for more details and an opening date, and will update this post if we hear back.

Each store includes an awning for drivers to park under and a brick-and-mortar store where employees put orders together. The Ballard store will have an elevated sign on the roof that faces south, so drivers crossing over the Ballard Bridge into the neighborhood can see it. The SoDo store is within the Starbucks headquarters building, according to project documents, and the awning is on the southeast corner of the parking lot. 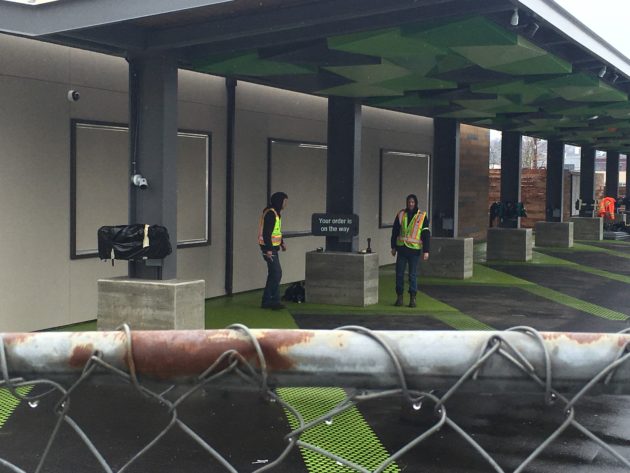 The bulk of the construction work appears to be done, and now the attention is going to finishing touches, like signs and other features.

Signs installed in front of the parking spaces at the Ballard location have been covered up for awhile, but for a brief time Saturday morning they were visible publicly as workers made adjustments.

The signs read, “Your order is on the way,” and they seem to be motion-activated. At one point, one worker appeared to be purposefully walking back and forth in front of one sign, as the message turned on and off. There was a cluster of four small holes in the lower right corner of this sign. 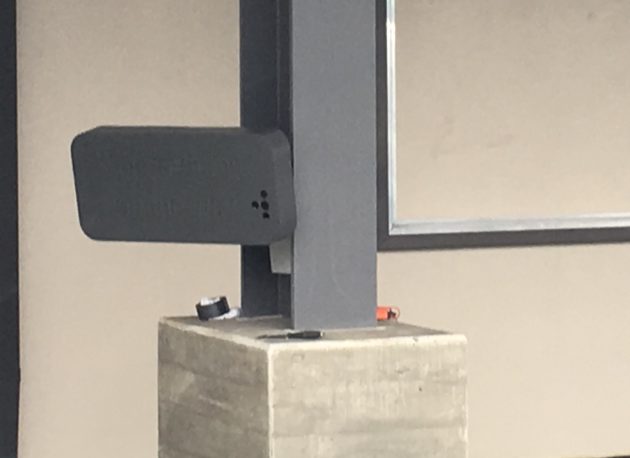 Amazon has yet to publicly acknowledge the stores, but the company’s name has appeared in permit documents several times. A description of the store popped up in documents last year, though things may have changed since then.

When placing an online order, customers will schedule a specific 15-minute to two-hour pick up window. Peak time slots will sell out, which will help manage traffic flow within the customer parking adjacent to the building. When picking up purchased items, customers can either drive into a designated parking area with eight parking stalls where the purchased items will be delivered to their cars or they can walk into the retail area to pick up their items. Customers will also be able to walk into the retail room to place orders on a tablet. Walk in customers will have their products delivered to them in the retail room.

Permitting information uncovered last year said hours of operation are expected to be 7 a.m. to 10 p.m. At peak time, there will be approximately 15 employees working on site, and three to five people will be dedicated to bringing orders out to parked cars. About a quarter of all trips are expected to occur between 5 and 7:30 p.m. The average wait time is expected to be about five minutes.

Amazon has in the past few years dove into the brick-and-mortar retail world, after making its name in online commerce. The company’s Amazon Go automated convenience store in downtown Seattle, unveiled last year, is open only to the company’s employees for now.

In addition, Amazon last week confirmed plans to open its 10th bookstore nationwide, and second in the Seattle area, in Bellevue, Wash. this year. Pop-up stores have begun showing up at malls all over the country, and the company appears poised to add more this year.

10 companies you’ve never heard of control more than 50 of the biggest restaurant...

80% Of Shoppers Give Thumbs Up To Chatbot Experiences, But 59% Remain Uninterested In...

Done Deal Wholesale delivers you the latest news, insights, tips, how-to’s and more to help you get it done. From eCommerce and retail trends to the latest products and suppliers its all here.
Contact us: contact@donedealwholesale.com